Haldon – the lay of the land

Haldon Station’s 22,000h is made up of three blocks. Haldon’s home block starts at 365m above sea level and the back hut country runs up to 1525m.

The Home block is 6,640 ha (freeholded in 1991) and because of its original 460ha area of border-dyke irrigation, which worked on a pneumatic system call the “wragg system”, could be considered as the heart of Haldon as it gives us excellent summer feed security. In 2002 the irrigated area was increased by a further 120 ha which uses surplus water from the border dyke and irrigates through a centre pivot irrigator. What was once a mostly barren 120 hectares capable only of grazing 10 sheep has since been used to feed 1400 yearling deer. Haldon station’s irrigation scheme has been such a success that we won the Balance Farm environmental award in 2005 for both water conservation and overall top farming practice, culminating in our winning the prestigious ‘supreme award’. The rest of the home block is mainly flat dry plains with 300 ha of Lucerne paddocks on the low hills leading up into the remaining area being steeper dry hill country. Another 200ha of pivotal irragation was added during 2013/2014 with an additional 194ha added in 2017. In 2019, 276 ha of the original (40 year old) border dyke irrigation was updated/replaced with state-of-the-art pivotal irrigation.

The two back blocks are 16,000ha of hill country. The Stony Creek Block is is currently in tenure review. The Kirkliston Block was freeholded in 2017. Since the early 1990’s a program of direct drilling quite high ground with clovers and cocksfoot has seen the miraculous turn around of hiracium dominant country into very productive ground (the initial start was with 800 hectares which we are continually adding to.) The remaining steep hill blocks consist mainly of over sown tussock country.

Extensive subdivision combined with rotational grazing are some of the main tools used here at Haldon, to allow over sowing and effective fertilization. The sheep and cattle and deer use the whole station living at certain times of the year in both the home block and the back blocks.

Animals are bred to cope and thrive in their environment which can sometimes be quite harsh here in the Mackenzie country with temperatures oscillating between +40 C in the summer and -20 C in the winter months. Over the years through excellent farming and breeding practices we have achieved enormous benefits to the genetic pool of our animals with Haldon Station being renowned for breeding robust dynamic high producing animals. One of our main objectives with all our breeding programs is to increase production per head rather than merely increasing stock numbers.

The lay of the land … 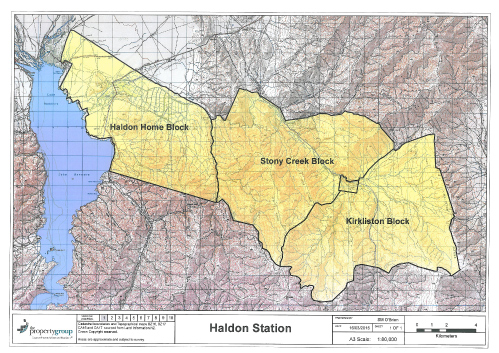